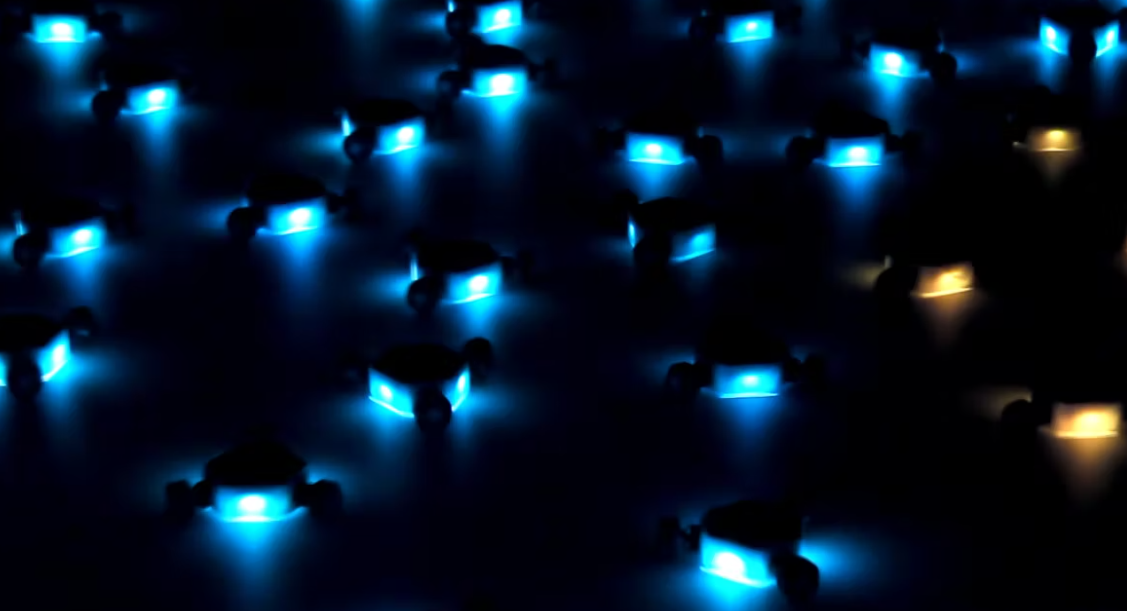 Empathy Swarm is an artificial life form that explores social interaction between non-human beings using behavior and movement as a language for interspecific communication that can also be understood by the human observer.

The interactive robotic artwork, which includes 10 robots, is a research platform for the embodiment of artificial intelligence and explores Marie-Luise Angerer’s notion of affect and her warning to keep coincidence alive as a special open form of possibility that could easily be lost through technology intertwining. life and the environment in a rigid AI system.

The driving force behind each robot is the emergent AI design, derived from the extension and modification of Craig Reynold’s Boids, an artificial life program developed in 1986 based on three principles for simulating flock behavior in flocks: separation, alignment and cohesion. it could be interpreted as personal space, conformism, and loyalty.

The society of non-anthropomorphic beings, acting as a living organism of its own nature, creates an emotionally charged atmosphere that shares the emerging story of unexpected encounters with all the actors influencing an ever-evolving system. Empathy Swarm, which narrates abstract versions of social interaction, integrates machines as social beings in the sense of Catherine Malabou, who uses this term to emphasize the need for antithesis to capitalistically and imperialistically motivated optimization goals of algorithms set by large technology companies.

Katrin Hochschuh is a media artist with an architectural background in digital design and robotics. Her artwork connects the digital and physical realms, exploring robotic behavior, algorithms, and interactivity, always seeing man, his perception, and the social implications of technology at the heart of her work.

Adam Donovan is a hybrid media artist working in the fields of science, art and technology. His artwork includes nonlinear acoustics, robotic sculpture, a game engine environment, and camera tracking. It explores the intangible aspects of physics to enhance their effects and create new media and experiences.