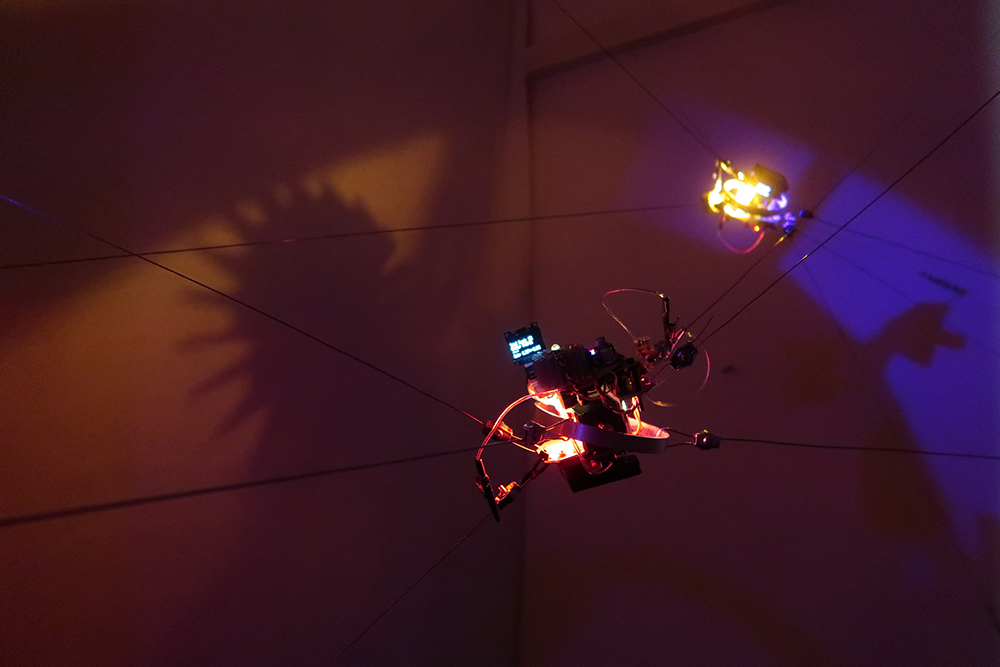 In his Cosmic Rain project, the artist Tilen Sepič analyses and visualises the phenomenon of “cosmic rays”, high-energy particles invisible to the naked eye that originate in space, mostly outside our solar system.

The installation uses muon detectors, which trigger strong flashes of LED lights and resonating beats of electromagnets. In physics, muons are elementary particles that, like electrons, are classified as leptons. On Earth, they are produced when cosmic rays hit the upper layers of the atmosphere. Even though their half-life is 2.2 µs, they can be relatively easily detected on Earth’s surface (with appropriate equipment) as they arrive at sea level with an average flux of about 1 muon per square centimetre per minute.

For a long time, the technology for such measurements was not accessible outside the context of laboratories and research institutions. In 2017, MIT published the blueprint of the Cosmic Watch muon detector, developed by professors and PhD students at MIT, WiPAC (USA) and NCBJ (PL) as free hardware and an upgrade of the IceCube Neutrino Observatory in Antarctica.

The Cosmic Watch uses a plastic scintillator as the medium and a silicon photomultiplier to detect light. When a muon passes through the scintillator, it generates a weak light pulse, which the photomultiplier thus amplifies and transforms into an electrical signal. The in-built micro-controller then recognises the signal. These open-source detectors can be adapted and used as triggers of light, sound and kinetic elements.

A multidisciplinary artist and designer who works in the fields of new media, light art, lighting design and the projection of contemporary audiovisual installations. In his work, he also supports open-source and DIY culture. He regularly participates at international light festivals that intertwine public art, city marketing and the use of new media and technology in the field of light. In recent years, he has presented his light-sound kinetic installations and light-based products. He has participated in several exhibitions and festivals at home and abroad.