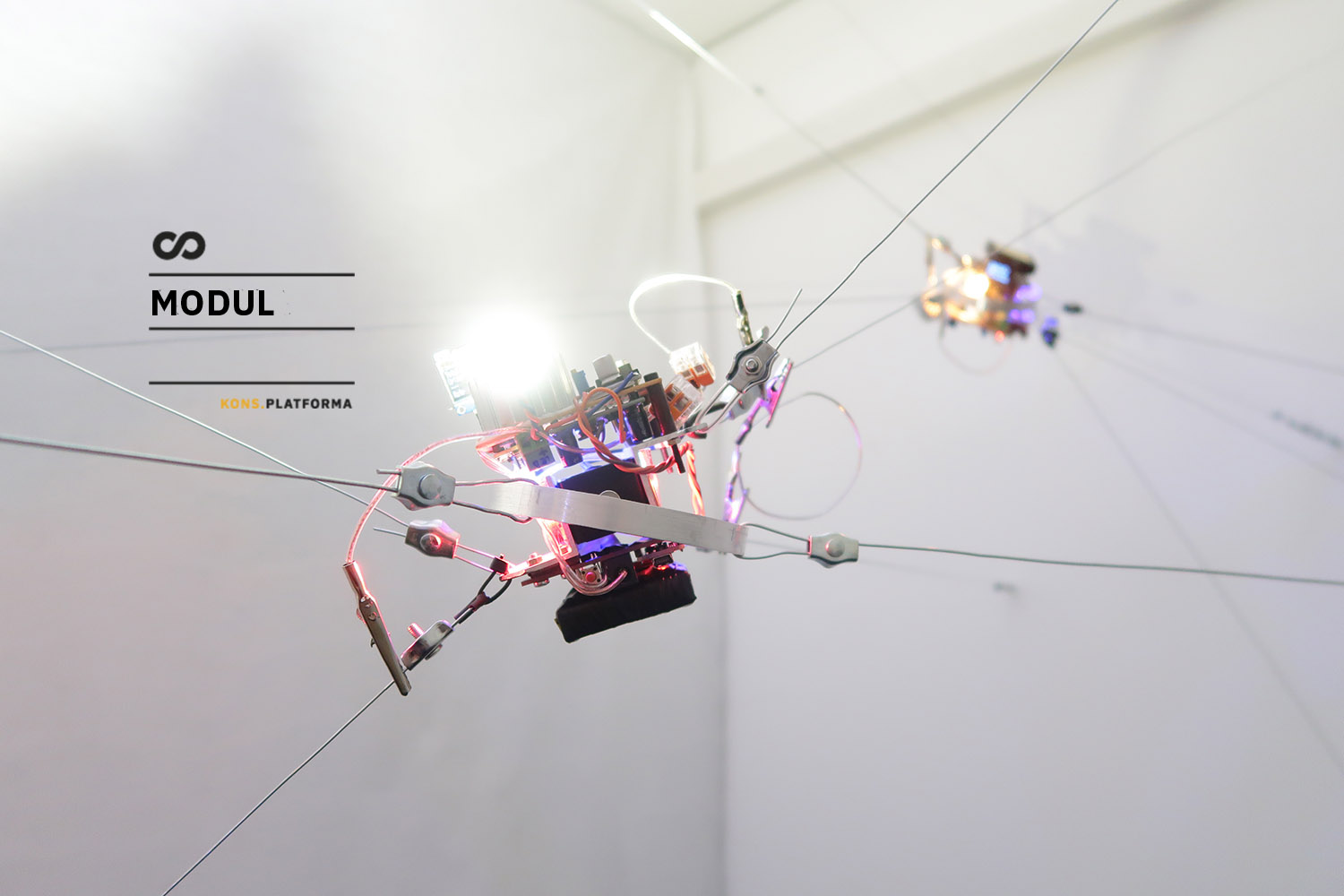 The platform establishes an ecosystem of creative activities for the critical development of the future, works on the capacity building and educating the communities for the creative use of high technologies, and thus creates an active network of transdisciplinary activities to promote access to sustainable social and technological innovation. Within this new territory and in cooperation with the 26th Festival of Computer Arts (MFRU), we created the konS modul in October 2020, with which we presented works of contemporary investigative art, produced in response to our invitation for projects in January 2020. In the discursive part, we focused on topics of artistic production on the crossroads (art-science-technology) and about the inclusion of art in innovation for the future.

We need to talk, UI

As an introduction to the module, on October 26, 2020, Aksioma presented the comic We need to talk, AI. On a journey through a comic essay We need to talk, AI about one of the most important topics of our time, we were taken in an online debate with the author dr. Julia Schneider in conversation with Nika Mahnič.

How to make computer science more attentive to minority and poor issues? Is it better for some institutions not to digitize? Is banning certain technologies a necessary solution or just succumbing to our techno-paranoia? Would this be possible at all on the free market? Should we renew our notion of privacy? The conversation responded to questions and opened up possibilities for an interesting view of artificial intelligence and dilemmas raised by its accelerated development.

The 8-channel sound installation Sound Interweaving by Boštjan Perovšek, produced by Cona Institute, is a combination of science and art. The scientific study of animal vibrational signals (biotremology) is interesting from the point of view for art mainly due to the sound manifestation of animal activity. Through the specific organization of sound mass, it can also reach into the field of communication between living beings. The project focuses on the webs of two spiders of the species Araneus diadematus; namely, the spider-webs also act as an extension of spider sensor systems. The vibrations emitted and received by spiders via the web are not detected by the human ear, but the exhibition reveals this invisible sound world. The exhibition composition consists of raw sounds of insect and spider activity, which are subsequently electronically modulated.

The research project, produced by the LokalPatriot from Novo mesto, made by BridA, Plantportation / Q-modul, is set as a multifaceted entry into the dimension of quantum entanglement and thus into possible theoretical consequences and interactions, including quantum teleportation, according to authors Tom Kerševan. Sendi Mango, Yuri Pavlica (BridA). The fact that there is quantum entanglement and thus the possibility of quantum teleportation has been confirmed and proven by numerous scientific experiments, yet this phenomenon is still inexplicable. The purpose of BridA is to build an interspace that is difficult to imagine with existing mental patterns. In this way, space and time become variables, and the observer becomes the medium through which quantum theory is realized.

Miranda Moss and Daniel Brownell developed the Gallus Gallus Roboticus project, produced by MKC Maribor. Gallus Gallus Roboticus is actually a website that monitors the remote collaboration of authors. Based on the fact that 7 billion one-day-old male chickens are killed worldwide each year, as the poultry industry considers them “uneconomical”, the aim of the final project is to develop open source artificial intelligence that can detect chicken sex in the embryo phase; the project also includes the production of an autonomous robot that will take care of the chickens. Through such a speculative approach, which is not focused on humans but on an unusual autonomous machine, a robot that will take care of chickens, the artists ask the question whether machines are perhaps more capable of humanity than humans.

In the history of art, only a few works have been fortunate enough to be understood not only as art, but also as useful tools, public spaces, cultural phenomena, memes. Line Rider, the work of Boštjan Čadež, is one such work of art. While the original game – created in 2006 – can still be played for free on the linerider.com website or in a smartphone app, Čadež is currently working on its 3D version, which will be played in virtual reality, and its preview was publicly presented on MFRU festival in Maribor. The new game will be released in 2021, the project is being developed by Aksioma.

Ljudmila presented the light and sound installation Cosmic Rain by Tilen Sepič. In the installation author analyzes and visualizes the phenomenon of “cosmic rays”, invisible to high-energy particles originating from outer space, mostly outside our solar system. The installation uses muon detectors that trigger strong flashing LED lights and the sound of electromagnets. Measurement technologies, as used in the project, have long been unavailable outside the laboratory and research-institutional context.

Kersnikova Institute produced project Biobot: Laboratory situation which focuses on tissue engineering and the development of a robot with a functioning biological muscle that moves the body. The author Zoran Srdić Janežič with experts cultivates neurons on a plate with electrodes that translate the electrical signal; this is converted from analog to digital, amplified and used to manipulate the movement of the Biobot. Biobot brings not only new materials, but also new processes into artistic practices and creates a new artistic language. He uses scientific and technological development in an unscientific way for the artistic structure of the biological and technological body. A biobot is a living entity with its own intelligence and right to exist as a living being.

Investing in the future: Lifelong competence building in STEAM in practice and in public policies

In modern society, we attach increasing importance to extracurricular and lifelong learning programs. These have become invaluable both in terms of introducing new content as well as testing and forging methods for new forms of transfer and skills development. The answers to complex systemic challenges (such as environmental issues, issues of modern networked society, demographic issues, etc.) lie not only in science and technology, nor only in the humanities and social sciences; there is not just one key; the key is the interweaving of approaches and views. The guests of the round table were:

Integration of art into innovation processes

Incorporating an artistic way of thinking into the creative processes by which creators want to reach a new product or new service allows the participating innovators an original, different, unexpected view of the starting points of the challenge they face. The participation of artists or art experts in creating new product or social innovations is evaluated in the same way as the work of all participants in the innovation process. Unlike designers and architects, who participate in market innovation processes as a rule, the participation of artists in creating products and services for the non-art market is not self-evident.

The participation of art in future innovations

Arts and other creative disciplines will make a decisive contribution to the common greater future, especially when it is given a key place in both social and economic innovation.

The discussion brought together views in the areas of interdisciplinary innovation and offered some examples of good practice. The interlocutors thus, from various perspectives, shocked the possibilities of establishing a radically open environment and deep connections to enable and promote positively disruptive innovations. Speakers of diverse profiles joined us, and we tried to cover a wide range of possibilities for cooperation:

The head of the discussion was dr. Peter Purg (konS – Academy of Arts, University of Nova Gorica)